President Robert Mugabe proclaimed on 8 September 2017, that Biometric Voter Registration (BVR) will commence on 14 September and end on 15 January 2018. Heal Zimbabwe through its resident human rights monitors in all the country’s 10 provinces is monitoring the political environment since that proclamation. This is being done with the objective of monitoring the environment and report on any cases of human rights violations during the process as well as making referrals where necessary for redress. In 2016, Heal Zimbabwe established an early warning and early response system for easy detection and response to cases of human rights violations.

Heal Zimbabwe is a peace building organization that envisions a peaceful and prosperous Zimbabwe that celebrates diversity in local communities. The organization is currently running a National Peace campaign: 13 Million Voices For Peace #13MilVoices4Peace aimed at raising awareness on the need for peace before, during and after the 2018 elections.

Below is an update of the voter registration process from 22-27 September 2017: 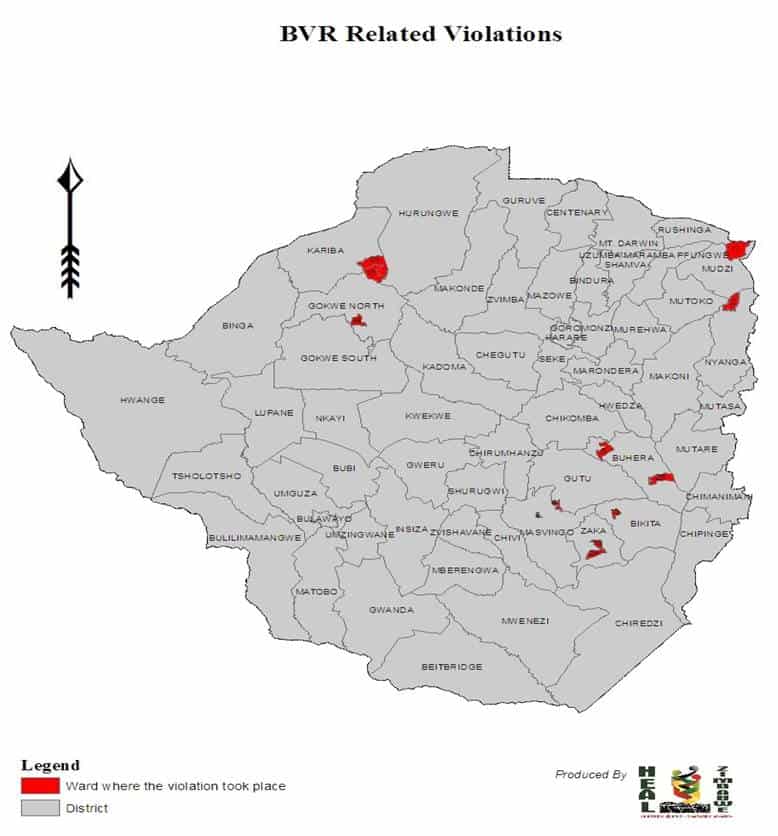 Zaka West Ward 24
A ZANU PF member only identified as Maga Maga intimidated community members during a meeting organised by ZANU PF on the 27th of September 2017 at Charuka Primary School. The meeting was organised by ZANU PF but everyone in the community was forced to attend regardless of political affiliation. Maga Maga addressed the meeting where he threatened people with violence if they vote for the opposition in the 2018 elections. He further stated that the BVR process allows his party to detect who would have voted for the opposition.

Masvingo District Administrator Complex
On 25 September 2017, the registration process was very slow as it took more than 30 minutes to have a single person registered. Trained Human Rights Monitors deployed by HZT reported that between 10am and 1pm, the voting process was relatively slow and this saw several people leaving before registering.

Bikita Institute of Training and Development, Nyika Growth point – Bikita West Ward 13
On 25 September 2017, Village head Patrick Ushe and Taurai Mamhonga, a ZANU PF member moved around the ward forcing people to register their names with them first before they proceed to Nyika growth point for the voter registration process.

Zaka District Administrator Complex – Ward 19
On Friday 22 September 2017, ZANU PF youth forced people at Jerera Growth point to make $1 contributions towards a ZANU PF meeting that took place on 24 September 2017.They were also taking down names of people who made contributions. The youth also told people that the BVR system allows ZANU PF to monitor the voting process on the day of the election thus allowing them to detect who would have voted for the opposition.

Gutu West ward 41
On 22 September 2017, Councillor Kaiton Nzembe conducted a meeting at Masvingise business centre and told people that they were supposed to purchase ZANU PF cards if they wanted to register for the 2018 elections. He also threatened people with violence in the event that they failed to purchase the membership cards.

Hurungwe West ward 15
On 25 September 2017, Village heads Mutsindo and Marowa told people at Chiedza township that the BVR process is meant to detect those who will vote for the opposition in the 2018 elections. They also warned people that if they wanted to continue receiving food aid, they were supposed to vote resoundingly for ZANU PF in the 2018 elections.

Hurungwe West ward 15
ZANU PF District Secretary identified only as Sibanda, intimidated community members on the 25th of September 2017 at Chiedza Business Centre. Sibanda threatened that the BVR kits will disclose voting patterns and disclose all opposition supporters upon voting. Sibanda ordered that the disclosed opposition supporters will be beaten after the announcement of the 2018 election results.

Hurungwe West ward 24
ZANU PF Vice District Chairman, Matunha Charovedzera intimidated community members on the 24th of September 2017 at Madudzo Business Centre.  Charovedzera told community members that the new BVR process will disclose all the names of opposition supporters who would have voted against ZANU PF. Madudzo further highlighted that all those who would vote against the ruling ZANU PF party will be heavily beaten.

Buhera West ward 25
ZANU PF supporter Cypren Gwara and ZANU PF District Secretary Vengai Muchinani intimidated community members during a ZANU PF meeting conducted on the 26th of September 2017 at Zangama Primary School. The two highlighted that the BVR system will assist ZANU PF in disclosing the identities of those who would have voted for the opposition in the 2018 elections.

Buhera West ward 5
Buhera North Member of Parliament, Hon Oliver Mandipaka intimidated community members during an official opening of a dam at Marume Business centre on the 22nd of September 2017. Hon Mandipaka threatened that community members should not be found on the “wrong side” when voting since the BVR kits will disclose voting patterns.

Nyanga North ward 2
On 27 September 2017, ZANU PF ward 2 Chairman, Wilson Sauro conducted a meeting at Avila shops with all 21 village heads in ward 2. Sauro directed Traditional leaders that they must inform people that the BVR kits will disclose all the people who would have voted against ZANU PF in the pending elections. He further threatened that all those who will vote for the opposition will be heavily beaten next year.

Mudzi ward 17
ZANU PF members, Charles Chitonho and Tawanda Kangora intimidated community members during a community meeting conducted on the 24th of September 2017 at Fuchira Primary School. The two announced that all opposition party supporters will be heavily beaten in the upcoming elections. Chitonho further highlighted that the BVR process allows them to see who would vote for the opposition next year. He threatened all known opposition supporters with eviction if they do not defect to ZANU PF before the 2018 elections.