ZESN deployed observers to observe the pre-election period. On Election Day, out of a total of 13 polling stations in all the three local authority by-elections, ZESN deployed 8 static observers. The ZESN election observation methodology complies with election-related provisions in the Constitution of Zimbabwe and Electoral Laws of the country. ZESN’s assessment of elections is also guided by a number of regional and international conventions and declarations which Zimbabwe is signatory to, such as the SADC Principles and Guidelines Governing Democratic Elections, the African Charter on Human and Peoples’ Rights (ACHPR), the International Covenant on Civil and Political Rights (ICCPR), and the Universal Declaration of Human Rights (UDHR). In addition, the Network is also guided by the GNDEM’s Declaration of Global Principles for Nonpartisan Election Observation and Monitoring by Citizen Organisations, Code of Conduct for Nonpartisan Citizen Election Observers.

ZESN observers reported that the pre-election environment in the three by-elections was calm and peaceful, without incidents of violence, harassment and intimidation. Political parties were reported to be campaigning peacefully.

Set up and opening of polling stations

Voting started on time at all polling stations where ZESN had observers in the three by-elections. ZESN observers reported that all essential materials for polling were available at the time of opening. These include ballot boxes, ballot papers, ZEC stamp, indelible marking pens, and biometric voters’ rolls. Polling stations were set up in a manner that ensured that voters could mark their ballots in secrecy. This is commendable as it guarantees the internationally recognised principle of the secrecy of the ballot in democratic elections. On average, each polling station had six polling officers.

ZESN observers reported that throughout the day, all polling processes were duly followed in line with the law at all polling stations where they were stationed in the three by-elections. Such procedures include showing ballot boxes to be empty, checking voters’ names against the voters’ roll, examining voters’ fingers for indelible ink and applying the ink, issuance of a stamped ballot papers, among others.

Political parties’ election agents for both contesting parties were reported to be present from the time of opening right through to closing and observed the counting process at all polling stations where ZESN had observers. This is commendable as it affords parties the opportunity to do primary observation of polling processes.

None of the candidates in all the three by-elections was female. This is worrying as it shows the continuation of the trend of limited participation of women as candidates in particular in elections in Zimbabwe. There is need for political parties to make strides to include women in politics to enhance women’s representation in elected positions and their participation in key decision making processes.

Turned away and redirected voters

Consistent with observations in preceding by-elections, voter turnout was lower than the turnout for the Harmonised Elections. Tsholotsho RDC Ward 20 recorded a 60% turnout while Ward 16 had a 55% turnout. The turnout in the Wedza RDC Ward 4 by-election was 62%.

The results for the Ward by-elections and the 2018 harmonised elections are shown in the tables below. 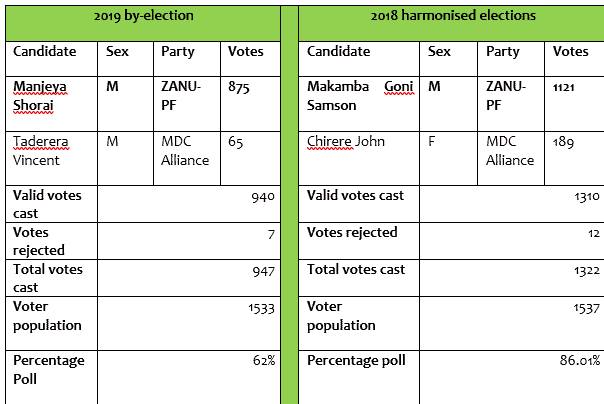 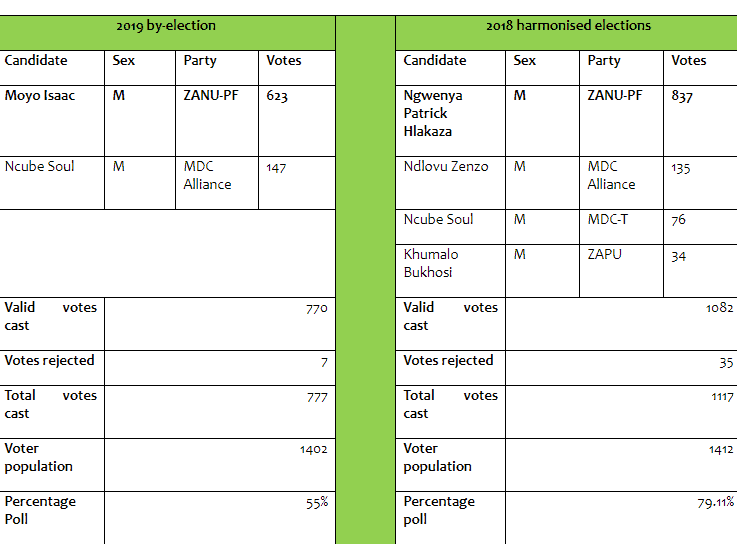 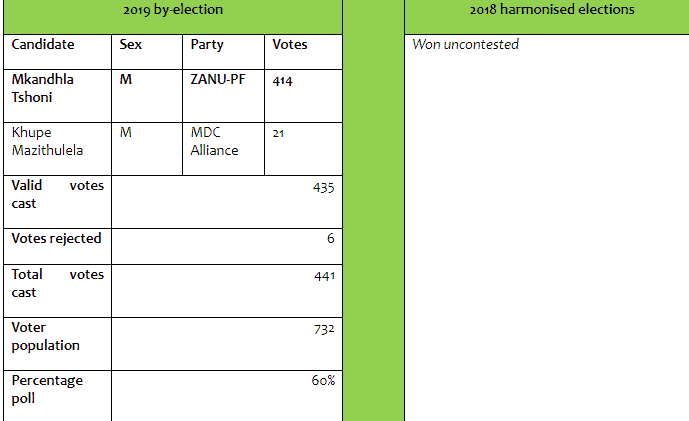 Votes received by ZANU-PF in the by-election decreased by 246 from 1121 which the Party received during the Wedza RDC Ward 4 during the 2018 harmonised elections. For the MDC Alliance, the votes decreased by 124 votes.

The margin between the votes received by the ZANU-PF candidate and the MDC Alliance candidate in the 2019 by-election is 810 votes.

The turnout in the by-elections is indicative of apathy that has become characteristic of by-elections in Zimbabwe. Nevertheless ZESN commends the political contestants, their parties and supporters for engaging in peaceful campaigns during the by-election.

Based on its observations, ZESN proffers the following recommendations:

Kubatana is a civic society information hub in Zimbabwe

As May marches on, we're slipping into your inbox…

Have you checked out 360 e:zine today? It is with…

Have you checked out this week's e:zine? Don't mis…

Congratulations to our friends at @voice2repzw for…