Following several requests by the Zimbabwe Election Support Network ZESN and other stakeholders for Zimbabwe Electoral Commission (ZEC) to release data, on the numbers of voters registered disaggregated by province and gender, the ZEC published the Biometric Voter Registration BVR data on its website in March 2018. Analysis of the data indicates that registration was generally high across all provinces. The BVR exercise resulted in higher numbers of youth and women registering as voters.

Table 1 shows an overall picture of both ZESN 2018 population projections and ZEC provisional BVR statistics. ZESN 2018 projections for the voting age population indicated that Harare has the highest number of people aged 18+ (134 818), followed by Manicaland (912 762), Midlands (865 185) and in fourth place is Mash West (834 414). The Province with the least number of projected population aged 18+ is Matabeleland South (356 586).

ZEC provisional BVR statistics (in the last column) shows that a substantial proportion of adult Zimbabweans (2 039 056) did not register in the BVR Blitz and mop up exercise or are yet to register. For example, Harare has a projected adult population of 1,3million (1 345 818) fewer than 800 thousand (747 920) have registered to vote. Thus the registered population of Harare, in light of the projected figure is 55.6%. The province with the highest proportion of registered voters is Matabeleland North (83.1%), followed closely by Midlands (82.9%). Bulawayo (51.6%) and Harare (55.6%) are at the bottom of the ladder of residents registered to vote.

Table 2 above compares ZESN projected voting population and ZEC provisional statistics. When the data is viewed by gender, the general trend is than more women than men across most provinces have registered to vote. Using the population projection, the gender divide is more apparent in provinces such as Matabeleland North (women = 86.2%; men = 79.3%) and South (women = 72.2%; men = 65.3%) and Manicaland (women = 75.4%; men = 70.2%).

The figure below shows an overall picture of ZEC BVR statistics of Zimbabweans aged 18 years and above registered to vote in the 2018 elections. 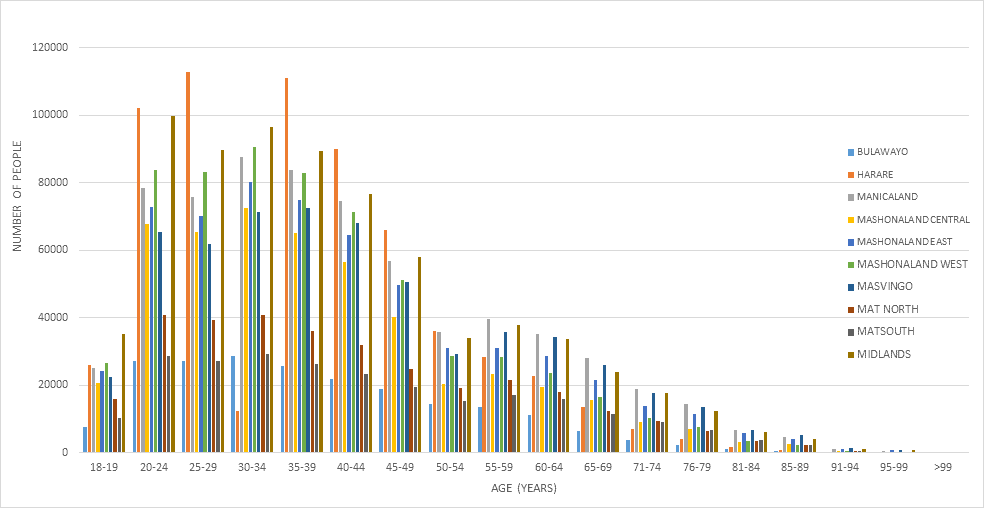 Figure 2: Age distribution of the population of registered voters 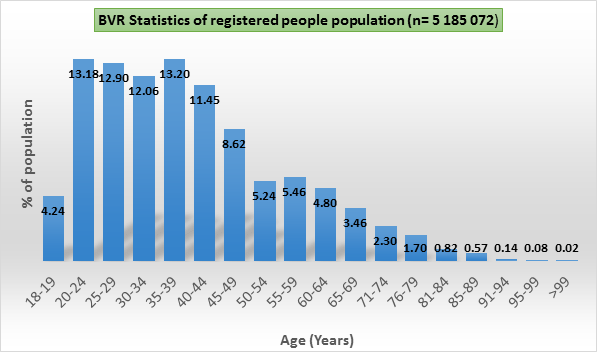 The graph above shows that the population registered voters is positively skewed, suggesting that the majority of registered voters, so far, fall into the younger generation category (20 to 44 years old). This could be attributed to the fact that Zimbabwe’s population is largely youthful. However, uptake of BVR has been considerably lower among the older generation and those aged 18 to 19.

Of concern to ZESN are the higher numbers of registered voters’ in Goromonzi South (65, 539), Epworth (63 961), Dangamvura – Chikanga (58 000) and Harare South (60 270) constituencies. This points out to the need for more polling stations in the respective constituencies and the need for a delimitation exercise post 2018 elections.

Although the statistics indicate a generally heightened interest in voter registration, with all provinces recording more than half of the projected population having registered, and more youth and women participation, there is still a need for concerted efforts to mobilise prospective voters to take part in the continuous registration exercise and to also turn out in the 2018 harmonised elections.