We demand our full salaries 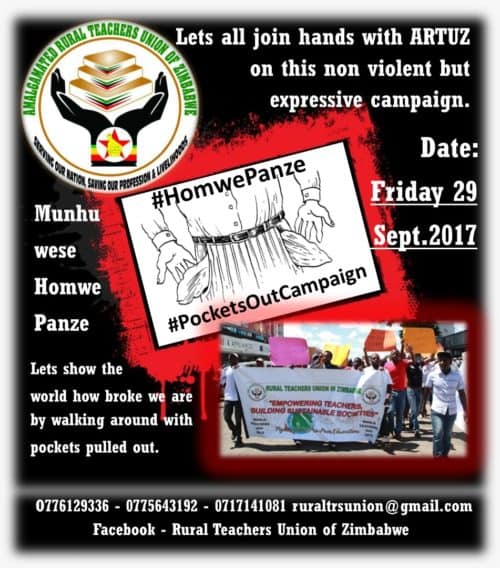 The Amalgamated Rural Teachers Union of Zimbabwe (ARTUZ) is appalled by the government’s lack of will to harness the scourging inflation and full scale economic collapse.

We are left with no option but to embark on a pockets out protest on Friday 29 September 2017 as we prepare to leave the classroom for the bank on Monday 2 October 2017.

The economic collapse has eroded the salaries of Teachers by over 100%, a day the money spent in a bank account is another lose of value of our pathetic salaries.

So bad is the situation that many a people are spending weeks queueing at banks trying to withdraw their bank savings.

The panic and pandemonium was escalated by a reserve bank (mis)governor who seem to be so detached from the prevailing situation at banks.

On Friday 22 September 2017, John Mangudya introduced bricks of five million bond notes in a mafia style-like scenario reminiscent of the 1997 Black Friday when the government printed $2 billion to compensate war veterans. The bond note had no choice but to succumb into a 1:2exchange rate with the USD.

John Mangudya just like his predecessor, Gideon Gono who presided over the 2008 economic meltdown which resulted in many losing thousands in bank savings okayed the situation dismissing the current ravaging inflation as social media jokes.

Once beaten twice shy, this is exactly what transpired in 2008. Teachers lost their income, their savings, their pensions above all their dignity.

The Public Service Act bars Teachers and all other Civil Servants from engaging in any other form of work to supplement their salaries. Our livelihoods and our future is therefore dependant on the salary.

We are fully committed to our work and expect to be paid in return.

The current economic challenges are not our baby and we will not silently bear the brunt of a man made crisis.

Many economists warned the government of the 2008 reincarnation if they introduce bond notes but all that fell on deaf ears.

Now that the chickens are coming home to roost they expect the already poorly paid civil servants to behave as everything is normal.

ARTUZ warns the government that if we as teachers are not going to get our full salaries on 29 September 2017 which is our pay date, we are left with no choice but to join others on the bank queues to recoup our salaries from banks.

On 29 September 2017, ARTUZ will conduct a pockets out protest wherein men and women will show the world how broke they are by walking around with pockets pulled out.

As such, the rural teaching community which organise under the banner of our pro-poor Union, ARTUZ demand that we get our full salaries before 02 October 2017.

Failure to get our salaries on the aforementioned date will leave teachers with no option but to join other civil servants on the bank queues to withdraw our salaries.

Prices of goods and services for those using plastic money have soared and we are no longer accepting it as an option.

The rural economy is still not compatible with plastic money, we have no option but to demand our cash in full.

Simply put there will be no classes as the teacher will busy at the banks.

As ARTUZ, we know the government created this economic malaise therefore we demand the same government to take heed and address our concerns.