The Zimbabwe Human Rights Association (ZimRights) has unearthed a scheme by the ruling party Zanu-PF of abusing government institutions and coercing civil servants to contribute to its political rallies.

The scheme is a serious violation of constitutional rights to freedom of association and political choice.

The development also exposes a rigged election campaign, abusing government ministries, departments, staff and resources for party business ahead of the 2018 harmonised elections.

In a letter stamped on September 4, 2017, R. Shangwa, the District Administrator for Guruve in Mashonaland Central Province, ordered all civil servants to fund the ruling party’s forthcoming youth interface rally on Saturday, September 9, 2017. 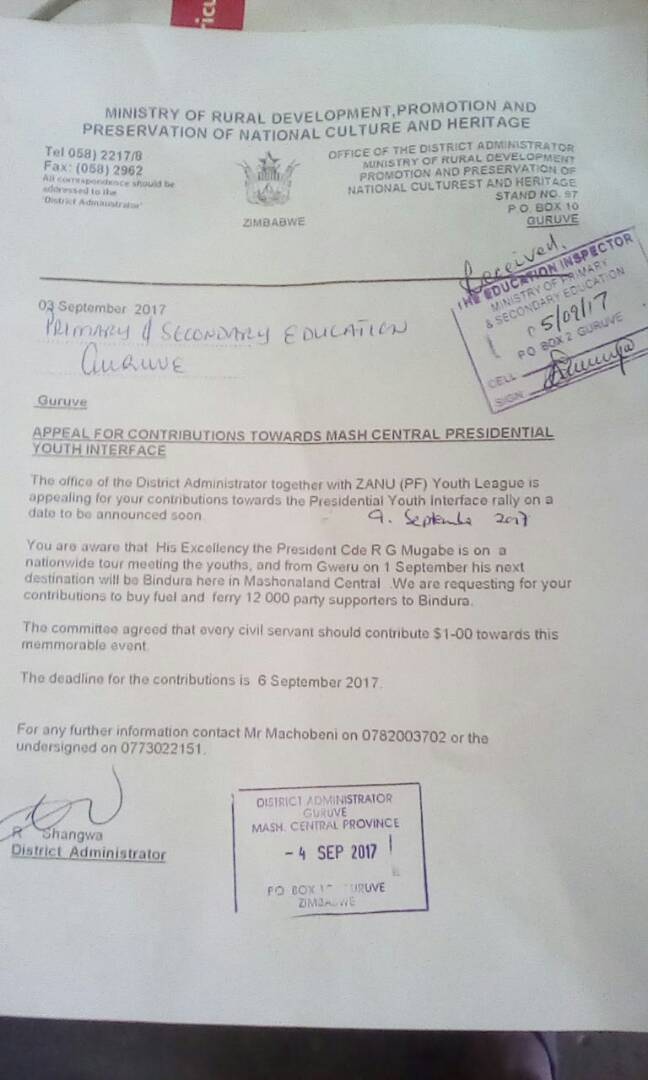 The letter, with the letterhead of the Ministry of Rural Development, Promotion and Preservation of National Culture and Heritage, was received and stamped by the Education Inspector in the Ministry of Primary and Secondary Education on September 5, 2017.

“We are requesting for your contribution to buy fuel and ferry 12 000 party supporters from Bindura.

“The committee agreed that every civil servant should contribute $ 1-00 towards this memorable event.

“The deadline for the contributions is 6 September 2017.”

Meanwhile, the government has been failing to release money to opposition parties under the Political Parties (Finance) Act.

ZimRights is concerned by the blatant abuse of civil servants and public institutions such as the District Administrator’s office, the Ministry of Primary and Secondary Education, and the Ministry of Rural Development, Promotion and Preservation of National Culture and Heritage for the ruling party’s election campaigns.

Civil servants have a right to freedom of association and to choose political parties they wish to support, including with financial contributions, without being coerced.

The scheme by the ruling party Zanu-Pf amounts to unconstitutional conduct and election rigging as it throws the freeness and fairness of the political campaigns for the next elections into serious doubt.

Kubatana is a civic society information hub in Zimbabwe

He dropped out of school to learn robotics. Now he…

Feel that chill? If only it was just in the air...…

As May marches on, we're slipping into your inbox…

Have you checked out 360 e:zine today? It is with…